BHAKTI - THE PATH OF LOVE 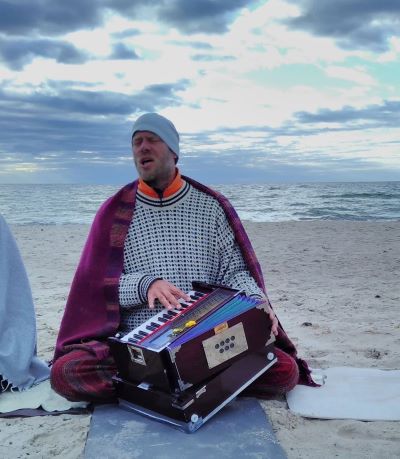 After many years as a dedicated engineer, working with cleaning exhaust gas from factories and power plants, Manereia overworked and crashed – mentally fatigued.

To recover he begun practice yoga and meditation. After some years he truly recognised that there is a mysterious loving force living in everything, giving life to death matter. He started to bow to the force, the loving force that make everything alive and real. A force that he sometimes calls God. He started to dance with the love-force and developed his own way of kundalini-shakti-bhakti-yoga practice.

After some time with devotional dancing and when the mind fully accepted that there is a higher intelligence that pervades everything, something much greater than the mind and brain ever can understand, a shift happened in the former engineer brain and he surrendered completely.

A while after the surrender a lightening containing an extreme strong white crystal white light emerged from the source and penetrated Manereia’s chest. This happened early morning 8:th of May 2007. Memories and knowledge from old lives entered his body system that started to remember his old path and missions, his brain and nerve system started to reorganise.

Eight months after the hit by the crystal white light the dormant kundalini power was activated in his body as a big, full body orgasm explosion. Everything changed. The main chakras in the spine were not open and the kundalini force therefore poured out from the root-chakra as hot, hot molten lava down into the legs. All available time was used to tame the force, clean out and open up the body both physically and mentally for the new. It took Manereia seven years of hard work to clean out and open up the main-chakras so the kundalini eventually could reach the brain that then exploded in a cascade of psychedelic colours.

After a while his brain managed to coop with the kundalini force, that for each day flows stronger. The psychedelic colours were replaced with the pure white light and a big hole opened up in the top of his head deepening the connection to the source.

Manereia has never used any drugs, psychedelic, ayahuasca or similar – and he will never do.

Manereia is here to support mother earth and all her inhabitants in the ascension to a higher degree of consciousness. His central teaching is that the love has many names and that is the same love-force (God) that flows in everyone and everything – regardless what you call it or how you express it. He doesn’t force anybody into his believes and respect the law of free will and that all individual’s have a free choice to select their own paths.

Manereia’s teaching initially aims for healing and then further into awakening. Manereia teach in different ways both verbally and energetically. Manereia teach intuitively without any manuscript and outside the books. Many times without words but through energy and shakti transmissions, which is his main way of teaching. Few leave untouched by the energy transmitted when performing spiritual activities together with him.

Buy and read his book “Kundalini Transformationen” written in Swedish.

Manereia lives on the country side in Småland, Sweden together with his wife. They have three adult children together. Manereia’s native language is Swedish.

don't want to miss any events?
Subscribe to our Newsletters

Your e-mail address will not be shared or sold

Already a subscriber? No problem if you subscribe again – you will only get one newsletter per mailing

By filling in the form to  the right you will be put up on the General newsletter with 2-4 mails per year. To tailor your mails to reflect your specific interests update your preferences for newsletters here.

We use cookies on our website to give you the most relevant experience by remembering your preferences and repeat visits. By clicking “Accept”, you consent to the use of ALL the cookies.
Cookie settingsACCEPT
Manage consent

This website uses cookies to improve your experience while you navigate through the website. Out of these, the cookies that are categorized as necessary are stored on your browser as they are essential for the working of basic functionalities of the website. We also use third-party cookies that help us analyze and understand how you use this website. These cookies will be stored in your browser only with your consent. You also have the option to opt-out of these cookies. But opting out of some of these cookies may affect your browsing experience.
Necessary Alltid aktiverad

Performance cookies are used to understand and analyze the key performance indexes of the website which helps in delivering a better user experience for the visitors.

Analytical cookies are used to understand how visitors interact with the website. These cookies help provide information on metrics the number of visitors, bounce rate, traffic source, etc.

Advertisement cookies are used to provide visitors with relevant ads and marketing campaigns. These cookies track visitors across websites and collect information to provide customized ads.

Other uncategorized cookies are those that are being analyzed and have not been classified into a category as yet.